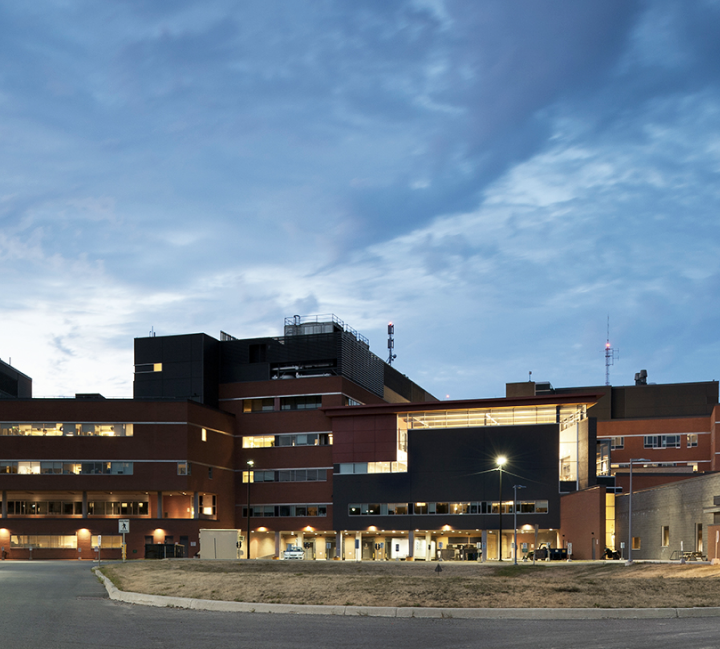 Peterborough Regional Health Centre (PRHC) is a regional hospital delivering acute healthcare to a rapidly-growing population of more than 300,000 in Peterborough and the surrounding communities.

With an annual budget of nearly $324 million, PRHC has more than 460 inpatient beds and offers a wide range of services, including specialized programs in renal, stroke, cardiac, cancer care, vascular surgery and mental health & addictions and is funded by the province of Ontario through the Central East Local Health Integration Network (LHIN).

PRHC is located in Peterborough, Ontario, Canada – a 90-minute drive north-east of Toronto. We are the region’s largest employer with more than 2,500 staff, 400 physicians with privileges, and 500 volunteers.

PRHC respectfully acknowledges that we are on the traditional territory of the Mississauga Anishinaabeg. We offer our gratitude to First Nations for their care for, and teachings about, our earth and our relations. May we honour those teachings.

The Health Centre has a proud local history extending back over a century.

Civic Hospital History
The first hospital in Peterborough and the 15th in the province opened in an old home donated by the city’s greatest benefactor in 1885. Charlotte Jane Nicholls, the widow of a wealthy city merchant, purchased the old home, known as Moira Hall, and endowed it with $15,000 for use as a Protestant hospital.

Nicholls Hospital at Moira Hall provided only temporary space for the sick and in 1889, Mrs. Nicholls funded the construction of a new hospital on Argyle Street. She liberally endowed it for the future as a memorial to her husband. An addition and nurses’ residence were later constructed and funded by the trust.

The trust financed the hospital until the 1930s, when trustees were forced to ask the city for monthly payments. A demand for more civic representation on the board of directors followed and in 1944, the trust was amended. The hospital became the community’s responsibility – a civic hospital.

The city’s growth in the 1940s dictated the need for a new hospital and in 1950, a 240-bed hospital was opened in the city’s west-end by then Prime Minister Louis St. Laurent. Soon, more space was needed and an addition, the Hutchison Wing, increased the bed compliment to 379 and featured a 26-bed psychiatric section and a 72-bed area devoted to recovery and rehabilitation. When more space was needed in 1969, a fifth-floor was completed, providing a 34-bed surgical section. In 1970, three temporary buildings were constructed.

Civic’s nursing school was transferred to Sir Sandford Fleming College in 1973 but remained affiliated with the hospital as it is with PRHC today. The same year, obstetrical services were amalgamated with the city’s other hospital – St. Joseph’s. A $1.5 million renovation turned the nursing residence into a psychiatric services facility, known as the Nicholls Building, in 1978.

The pediatric unit centralized at Civic in 1983 as a further consolidation of services with St. Joseph’s. In 1987, the ministry approved an Emergency Department (ED) expansion, major renovations to Nutrition Services and loading docks. To make room for the ED expansion, a new 4,400 square-foot building was constructed to house the ambulance services.

St. Joseph’s Health Centre History
Founded by the Sisters of St. Joseph, the city’s second hospital, St. Joseph’s, opened as a 25-bed facility in 1890. Named after St. Joseph to inspire diligence, charity and cordiality, the sisters worked 10-hour days without compensation to pay for the $20,000 hospital, to which 54 people were admitted the first year. St. Joseph’s operated on $4,716.20 that year.

St. Joseph’s was dedicated on August 20, 1890, at which time Bishop R. A. O’Connor declared the hospital’s philosophy would be based on the nature of the whole person, their dignity and worth, regardless of social or economic status, colour or creed.

A nursing school with a strong academic foundation and an emphasis on holistic health care and the development of a spirit of generous service to humankind, opened in 1906. The first class, consisting of six sisters and one lay woman, graduated in 1909. The school operated until 1973 when nursing schools in the province were transferred to community colleges. Sir Sandford Fleming College’s training program was then associated with St. Joseph’s as it is with PRHC today.

Construction started again in 1908, when a three-storey addition that included an elevator and space for 12 beds was erected. In 1921, the cornerstone was laid for a five-storey addition, which would provide space for several operating rooms, an obstetrics department, a doctor’s lounge and 60 more beds.

Until September 1998, the hospital was owned by the Sisters of St. Joseph and governed by a Board of Trustees. St. Joseph’s received full accreditation in 1959, which it maintained until 1998, when it was directed to be closed by the Health Services Restructuring Commission, a provincially appointed body which reviewed the provision of hospital services in Ontario. The former St. Joseph’s Health Centre then became known as the Rogers Street Site of PRHC. It remained open until the construction of the new PRHC was complete. The facility closed its doors on June 8, 2008 and was put up for sale.

In 1990, a 90,000 square-foot addition to the Emergency Department, as well as a downtown location for the Women’s Health Care Centre opened. PRHC came to be on January 22, 1999 following directives from Ontario’s Health Services Restructuring Commission that included closing one of the city’s two hospitals – St. Joseph’s Health Centre. All hospital-based services were to be offered on the former Civic Hospital site, which was to undergo a $52.4 million renovation. The Commission recognized this site, on Hospital Drive on the city’s west-side, as a regional referral centre and recommended a new name to reflect the new role.

In June 2000, the Ministry of Health and Long-Term Care issued new directives that included the go ahead to plan construction for a new hospital. The Health Centre continued to operate on the two former sites until the construction of the new, state-of-the-art facility was complete.

The new hospital opened its doors for patient care on June 8, 2008.

This website uses cookies to improve your experience while you navigate through the website. Out of these cookies, the cookies that are categorized as necessary are stored on your browser as they are as essential for the working of basic functionalities of the website. We also use third-party cookies that help us analyze and understand how you use this website. These cookies will be stored in your browser only with your consent. You also have the option to opt-out of these cookies. But opting out of some of these cookies may have an effect on your browsing experience.
Necessary Always Enabled
Necessary cookies are absolutely essential for the website to function properly. This category only includes cookies that ensures basic functionalities and security features of the website. These cookies do not store any personal information.
SAVE & ACCEPT
Please check the COVID-19 page for the most recent information before coming to the hospital.Read More
+
Go to Top